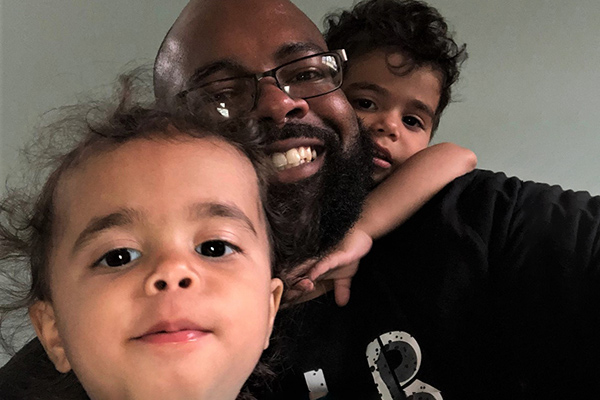 A natural extension of their mission to care for Kentucky’s most vulnerable children, DCCH’s Adoption Program was licensed in 2001 and brought to fruition in 2003 when Cory Klosinski achieved his dream of stability with a family when his adoption was finalized on May 28, 2003.

In November 2020, DCCH Adoption/Foster Care Director, Ron Bertsch, met with Cory to reconnect after 17 years. Cory is now 31 years old their meeting date coincidentally fell on his birthday, something he does not celebrate, as Cory said he never thought he would live this long. Cory was 11, just shy of his 12th birthday when placed with Barb and Jerry Klosinski, his foster-to-adopt. After 18 months, his adoption was finalized.

Today Cory is a businessman, working for himself as a real estate investor. Cory served his country in the United States Army. He was stationed at Fort Wainwright, Alaska and spent a year in Afghanistan earning the Army Achievement, Good Conduct and his most proud, Combat Spurs medal for rescuing a group of Cavalry Scouts. Unfortunately, Cory suffered significant wounds from a battle strike, but is alive, functioning, and grateful.

Cory is a great athlete, playing all kind of sports, but his favorites are baseball and ice hockey. He’s back on the skates, and also enjoys racing cars and building them. He is an expert marksman who worked as a long-range Stryker brigade combat team member within the military, and still finds time to enjoy shooting competitions. Four-wheeling and video games are two more talents developed while in his adoptive home.

Cory is back in Kentucky after meeting his wife in Alaska. Now father of a set of twin toddlers, a boy and girl, he shows deep pride in sharing photos and videos of these two beautiful children. He is close with his mom and dad and two brothers, sisters-in-law, and four nieces and nephews. His adoptive family always helped him keep a relationship with his biological siblings and that meant so much to him. He has since started to create a relationship with his birth mother and father too, which comes with its own set of emotions.

Cory has never forgotten some of the lessons learned while in DCCH’s Residential Treatment Center. He credits Doug Harlow, then a young childcare worker and now Residential Director, for helping change his life. Doug’s job was to be the surrogate parent for the 7 boys and girls sharing that apartment unit. Doug, like all of DCCH’s direct-care staff, fulfilled all the duties of a parent figure. At bedtime, when checking on Cory before lights out, Cory recalled the routine fondly. He said Doug would come in and say a prayer with him, and then read a poem. “Never lose your dream” is a line within a poem titled “A World Without Dreams,” recited nightly while Cory was living in DCCH Residential Treatment Center, which he remembers and now shares with his own children.